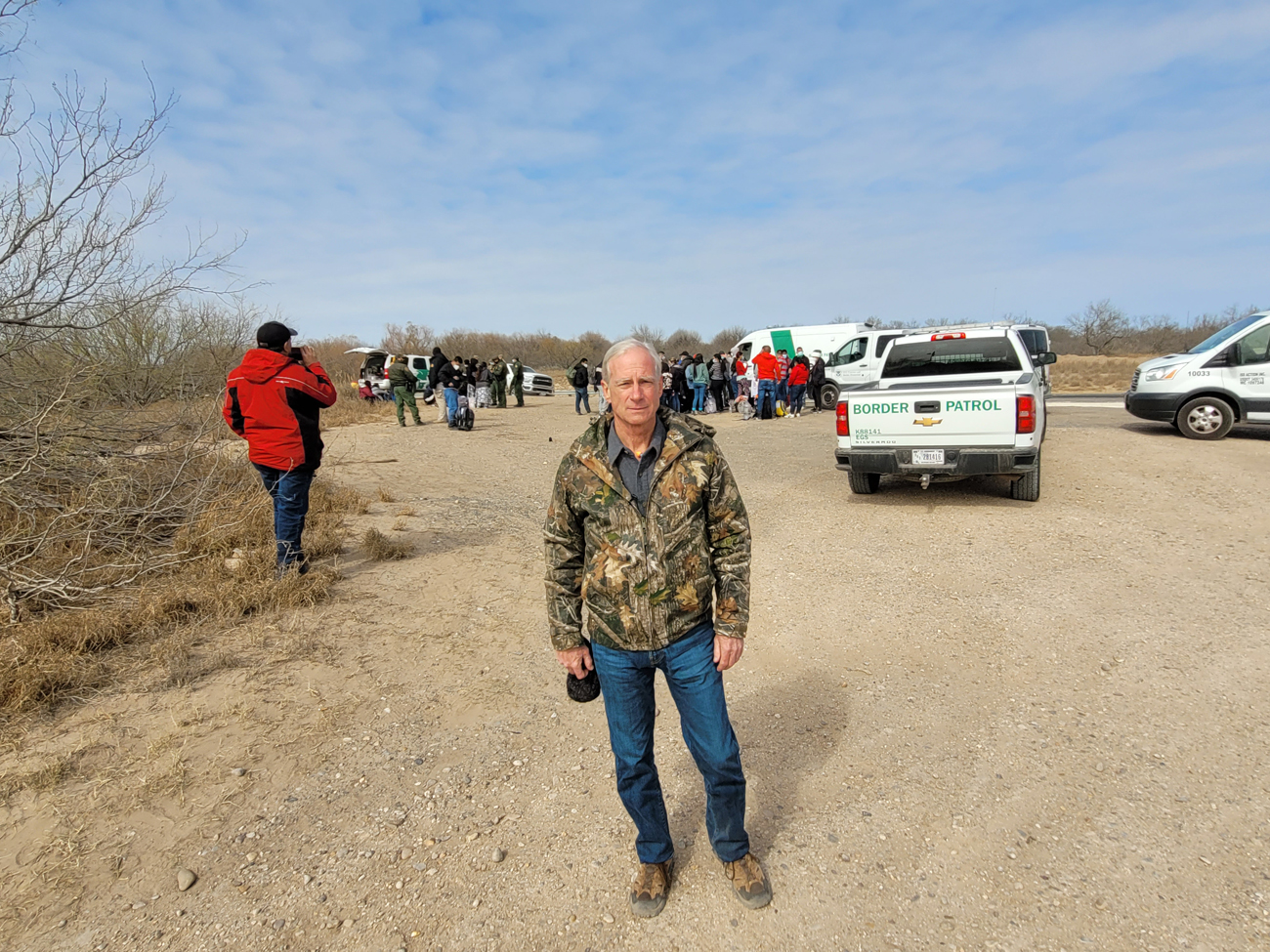 Last week I visited the Texas border towns of Laredo, Roma, Eagle Pass, & Del Rio. The border "wall" in these areas, including what the Abbott administration is constructing, appears primarily intended to funnel people to Border Patrol collection points, not really keep anyone out of the country; the drug "mules" do not generally cross in these spots. 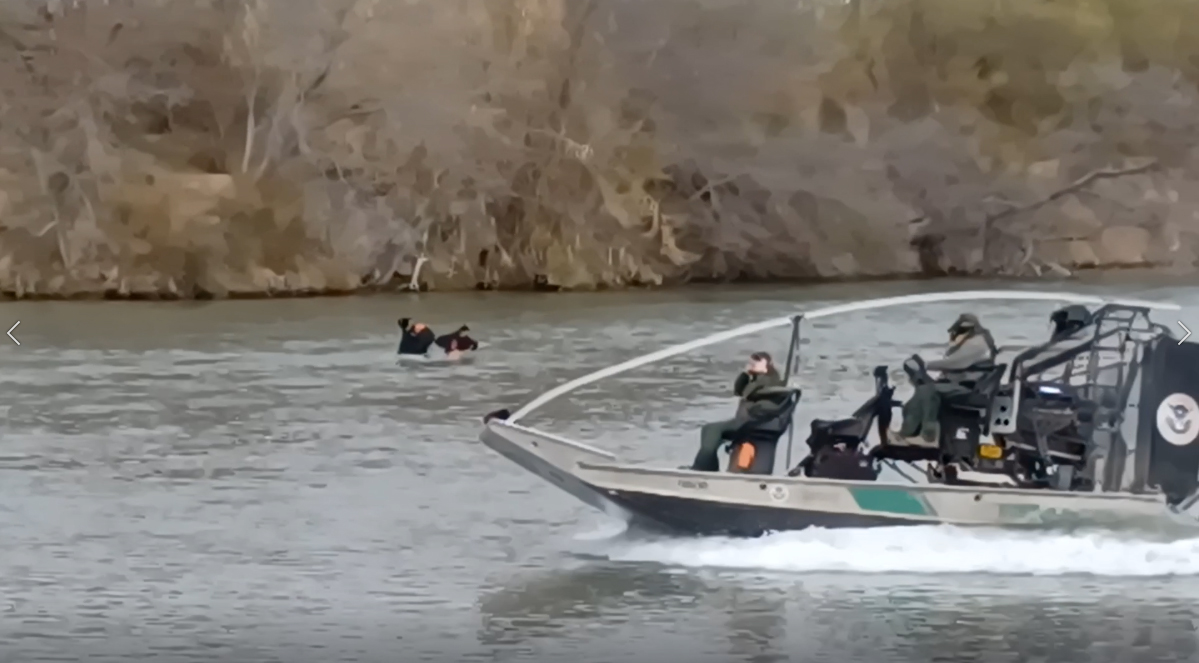 The federal Border Patrol Agents "Agents" use a few at a distance intimidation tactics, but basically just watch people cross "Crossers". Once on the U.S. shore, there is a congenial meet and greet, baggage, if any, is checked for contraband, tagged, and then collected for later return to the one who initially claimed it at river's edge.

In one instance, I was checking the shoreline after a group came across and found a Venezuelan passport for one man floating in the river, and nearby, a government ID for one of the women. I attempted to give them to the Agent seemingly in charge, but was told to just "throw them in the trash". It was explained to me that most of those coming across have a "Mexican government" issued form of identification and a Card with an address for where they want to go, or contact phone number, and that they would be transported / released to the requested contact. 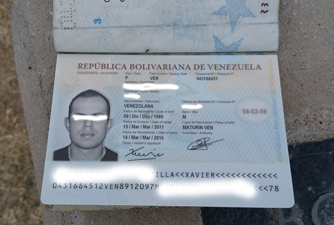 One logical question becomes, why are they are ditching their original ID, for another? Agents told me they do fingerprint everyone "14" and older, and check those against U.S. and Interpol records, but a great many actually originate from countries that do not have or share records, so it is difficult to know who a great many of them really are.

Considering all the limits on legitimate travel over concerns for disease transmittal, I asked about testing or any other limits on these Crossers, and was told that only those showing obvious signs of sickness are tested, but otherwise not.

From rivers edge, Crossers are transported in federal Agent vans to a central Processing Center. While not allowed to enter myself, I saw entering, fully loaded van after van. I also saw large empty busses going in and loaded buses leaving; these buses appeared identical to those contracted by the federal government, which we see so often on the news, dropping Crossers off en mass, at airports and other places.

Many of the buses take Crossers to NGO's ( Non-Government Organizations) operating under grants and/or lucrative government contracts, where they are then released to local contacts or assisted in relocating to wherever. I visited one of the NGO's and watched the process, again from outside as I was not allowed in.

Based on my conversations with both Agents and locals, it appears that many, especially the very young "adults" arrive having already been sexually abused, and deeply in debt to those who got them to the border. There is really only one way to possibly earn enough to try to pay off the debt, and the contact information they give the Agents generally has them headed to the major sex trafficking communities. I was told that a few of them try to escape, by begging Agents to not call the number on their Card, and/or send them to any place but the address shown.

As with so many issues, something is illegal until the Government finds a way to profit from it. This is how it has been with gambling, and it is the same with illegal immigration. The federal government is illegally trafficking people throughout the country for no perceivable reason other than to create a dependent class of people that can be manipulated for political purposes. The current administration fought hard to ban the question of citizenship from the Census, and several of the states that are seeing many tens of thousands of citizens leave annually for southern states, now allow non-citizens to vote.

Further, we have all heard it said that illegals will do the jobs Americans won't, and for less. Are Marxist / socialist democrats trying to replace the slave labor they lost to emancipation, and the cheap labor lost to the civil rights movement they fought against in the 1900's?

America is a nation of immigrants, even the "Native Americans" were themselves immigrants to this continent. What made it great was its Judeo Christian work ethic and the individual freedoms our unique Constitution guarantees. Those who come to leach off it rather than become truly a part of it - learn our language, history, culture, laws, an even the faith that formed it - need to be sent home.

People are being seduced to come here by unscrupulous groups, which then prey upon them mercilessly, and our federal government is a party to this abuse of humanity through its encouraging policies and practices. Texas must enact severe state penalties, financial and penal, for crossing our international border without permission, and as well as for encouraging anyone to do so. Since the federal government is only making it worse, Texas needs to send federal Agents home (or limit them to official international entry points only), so the state of Texas can deal with this problem, Texas should sue the U.S. government, Mexico, and any other nation that shows a willful participation, for damages suffered due to their willful participation in funneling millions to and through our borders. Once enacted, Texas must initiate an advertising campaign distributed in major source nations as to what awaits them enroute from unscrupulous Coyotes, and how new laws which will be enforced.